"We love the direct mail reply cards because they include variable data, so the donor’s name, address, and ID number change based on the person we deliver it to."

The All Academy Challenge is a friendly competition between the graduates of all five U.S. service academies – Air Force Academy, Coast Guard Academy, West Point, Merchant Marine, and Naval Academy – to see which academy can get the highest percentage of graduates to make a donation during a five-day period.

This year, Shawmut Communications Group had the pleasure of supporting West Point Association of Graduates, which manages the fundraising efforts for the United States Military Academy at West Point.

“Direct mail kicks off the All Academy Challenge,” West Point Association of Graduates Assistant Director of Annual Giving Katie Scofield said. “The mailer serves as our first marketing piece for this special fundraising competition. It’s an opportunity for us to promote the importance of participation. Donations of any size, to any fund, count in the challenge.”

In 2021, West Point sent about 30,000 brochures to alumni, encouraging them to donate. Each vibrantly-designed brochure explained the mission and gave donors a rip-away panel to mail back with their donation.

“We love the reply cards because they include variable data, so the donor’s name, address, and ID number change based on the person we deliver it to,” Scofield said.“The reply card also provides a space for the donor to submit a quote on why he or she gives back during the All Academy Challenge. We then use these quotes in social media campaigns and promotional videos.”

During the challenge, West Point collected gifts from 11,575 graduates for a grand total of $2.57 million, putting West Point in second place (22.5%) behind the Merchant Marine Academy (23.1%) for overall alumni participation.

“We see a positive response from direct mail,” Scofield said. “Our direct mail campaign brought in a total of 806 gifts for a 2.74% response rate. In addition to bringing in donations, the mailer serves as an exciting touchpoint and reminder for the annual giving challenge.”

Reaching graduates for a fundraiser in an effective, trackable way.

Sending a direct mail campaign with variable data to personalize and track each mail piece.

West Point could easily measure the effectiveness of their direct mail campaign. 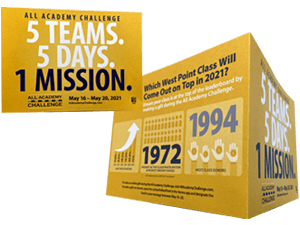 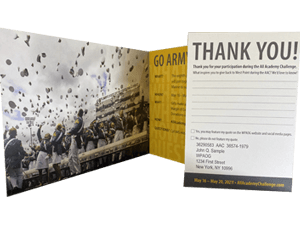